Menu
Log in
Register
Install the app
You are using an out of date browser. It may not display this or other websites correctly.
You should upgrade or use an alternative browser.

Roll the stone away It's Independence Day! (July 3-5)

Okay folks....
At the beginning of this year, I decided to make it a goal to visit Walt Disney World over Independence Day weekend. Now keep in mind, I've been over New Year's Eve twice, but this is the very first time I am going over Independence Day, plus the first time I will do a weekend trip involving me arriving Saturday, and heading home on Monday afternoon. I ended up booking this at the beginning of May much to my mom's surprise.

Oh! And did I mention this is my first time EVER staying at Grand Floridian? I've stayed at the Polynesian in November 2007, Boulder Ridge/Wilderness Lodge in December 2017, Yacht Club in July 2019, and the Contemporary in August and December 2020! So this will make it as being that I have stayed at 4 deluxe resorts (this trip will make 5), and now stayed at all three monorail resorts over a course of 14 years!

That sounds like a great plan! I’d love to stay at the Grand Floridian some day!
I

puffyjj said:
That sounds like a great plan! I’d love to stay at the Grand Floridian some day!
Click to expand...

Sure does! I'm quite lucky to have stayed in the Contemporary twice last year!
K

You must be a lot younger than me - your saturday afternoon exhausts me just looking at it!!! have a great trip!

Since Sunday is July 4th, you may want to plan for a midday break in the park. It is possible that attendance will shut the park down in the afternoon, so you may not be able to get back in if you leave. Not sure how they are going to handle it, but better safe than sorry!
I

ThemeParkCommando said:
Since Sunday is July 4th, you may want to plan for a midday break in the park. It is possible that attendance will shut the park down in the afternoon, so you may not be able to get back in if you leave. Not sure how they are going to handle it, but better safe than sorry!
Click to expand...

Good thinking...
Anyways.... Everything's all packed!
And we're at four days to go!
And did I mention that I have booked another trip for October 7-8?!
I

Congrats on getting your Ogas reservation. Have a wonderful trip!

Staff member
I was able to snag a Oga's reservation today also (for mid-August). After checking for the last week, and not finding even a single time available, today there were multiple choices on a couple different days of our trip. It seems they may have increased capacity... (which is good and bad)
I

Have fun! Enjoy! Looking forward to hearing how it went.
I

Starting this off where things should start off...
Day 1 - Travel Down, Epcot, & Hollywood Studios

I awoke around 6:30am to have a quick breakfast before heading down to the Deland Amtrak station. It was really rainy outside my window when I woke up and by looking at the Amtrak tracker map, 91 was already running well behind schedule, around 1-1.5 hours late. "This shouldn't be too bad I figure" I said to myself. I got picked up by Uber around 7:25am and was in Deland before the station building even opened up. Amtrak had already texted me saying the train was 1 hour late. Then around 8:34, Amtrak posted an alert on Twitter: 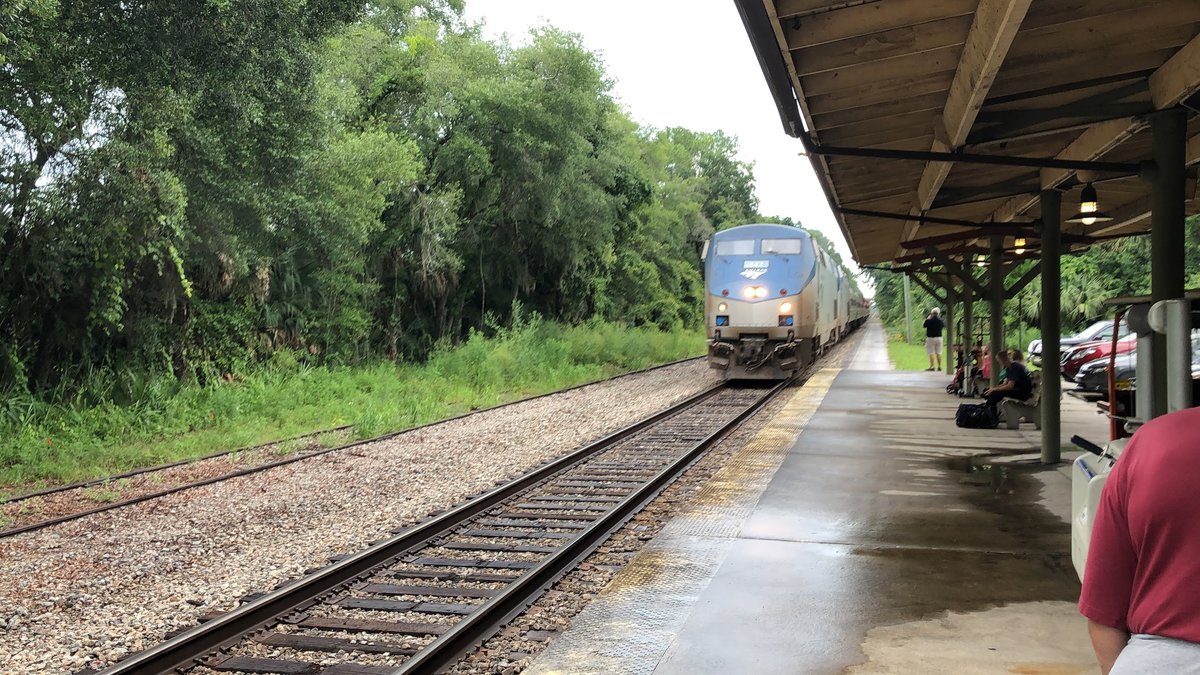 That's my train, arriving right into the DeLand station.

This is where I want to vent. Had I done four days, as opposed to three, I would've come in that Friday on SunRail and Lynx and been able to do Disney Springs. This is beyond crazy. Had I Ubered to Seminole Center in Sanford (Not referring to Seminole Towne Center, but where the Walmart & Aldi are), and taken Lynx Links 103, 102, and 50 down, or if this was a weekday and I had taken SunRail and Lynx Link 50 down, I would've been there.

I did grab lunch on the train's cafe car. Only got myself a hot dog and some chips, with a coke. I mean, not too bad considering it's only an Amtrak Cafe Car.

Ended up arriving to Kissimmee around 12:30pm and had only a 30 minute layover before boarding Lynx Link 56 to the Transportation & Ticket Center. Around noon, before the train pulled out of Orlando, I got the room ready notification!!! I was going to be in Sago Cay on the 5th Floor!

Now this is where I had the only issue this whole trip thus far:
I was a tad bit confused looking for my room, until I eventually came across it. I tried to use my MagicBand to unlock it, no use. Tried using my iPhone/MobileMagic to unlock, but somehow couldn't get the Bluetooth on the App to work. I called the front desk and they sent someone up (two people up)! And turns out, there was an issue with my MagicBand. One of the kind ladies was nice enough to take my MagicBand up to the front desk and they managed to fix it, I also got a key card as a backup from the front desk too which was nice. And here's how I got the MobileMagic/Bluetooth issue resolved - I called Apple Support and they recommended for me to reboot my phone - it worked!
THANK YOU DISNEY! AND THANK YOU APPLE!
Anyways, I was assigned to room 5514 - and had a really good view of the monorails passing by! And it's a really nice room too! 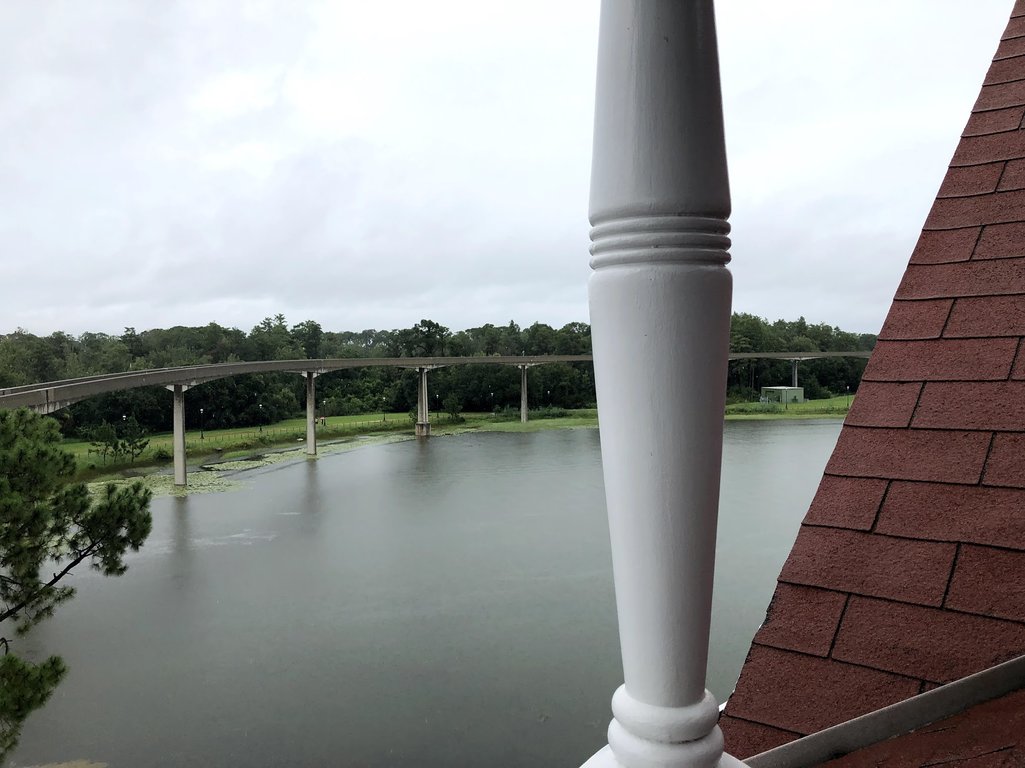 The plan of the day was to hit Epcot and Hollywood Studios, and seeing I'd not have enough time to do everything I wanted to do given the train delay, I decided to make the most of it that I could.
Since the Epcot Monorail was still not running, I got the bus to there, and decided to do Soarin' get out, go to Studios, and hit Oga's Cantina, and Smuggler's Run and (if time permitted) Runaway Railway.
And boy did I do just that, except for Runaway Railway.

And this time, at the Cantina.... I got the Jedi Mind Trick! 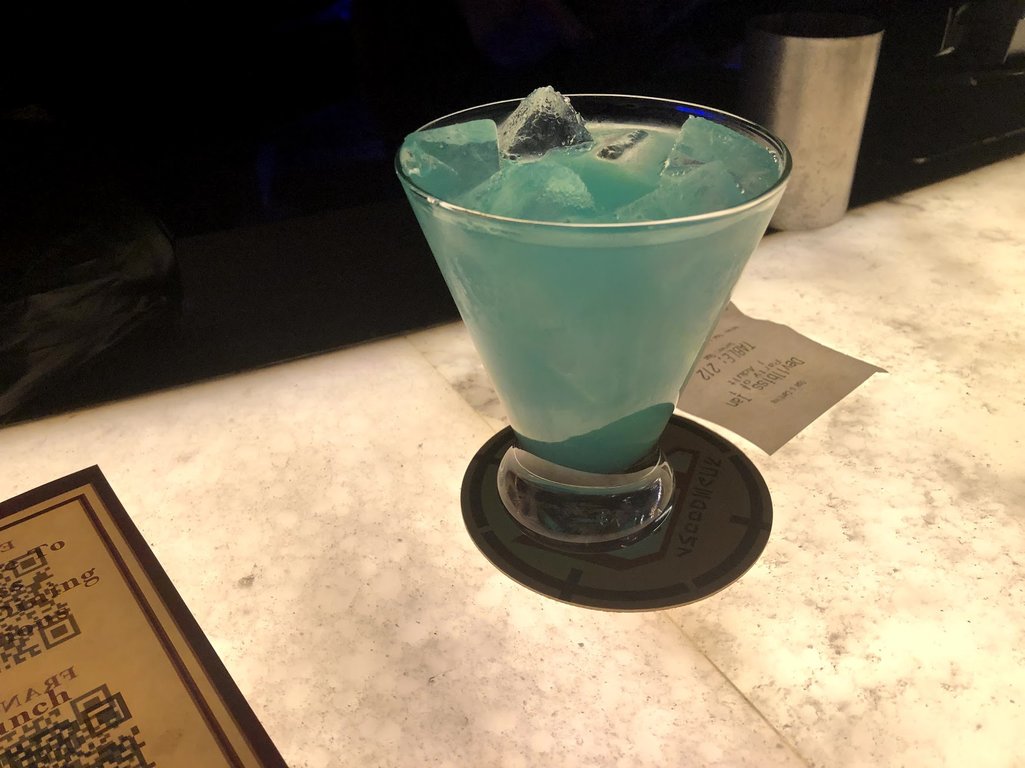 Last time, I got the Fuzzy Tauntaun which is by the far the best drink the Galaxy has to offer, but I will admit - this is better than getting numb lips. Not a fan of the meat and cheese board there though.
Oh and after that, I did MFSR as pilot! Not a good idea after drinking though.

After that I called an audible and got the Friendship Boat to Epcot to knock down Gran Fiesta Tour and Mission: Space before seeing Epcot Forever for the final time.
And guess what I see by the time I get to Epcot? More Harmonious Testing, this time the water effects! 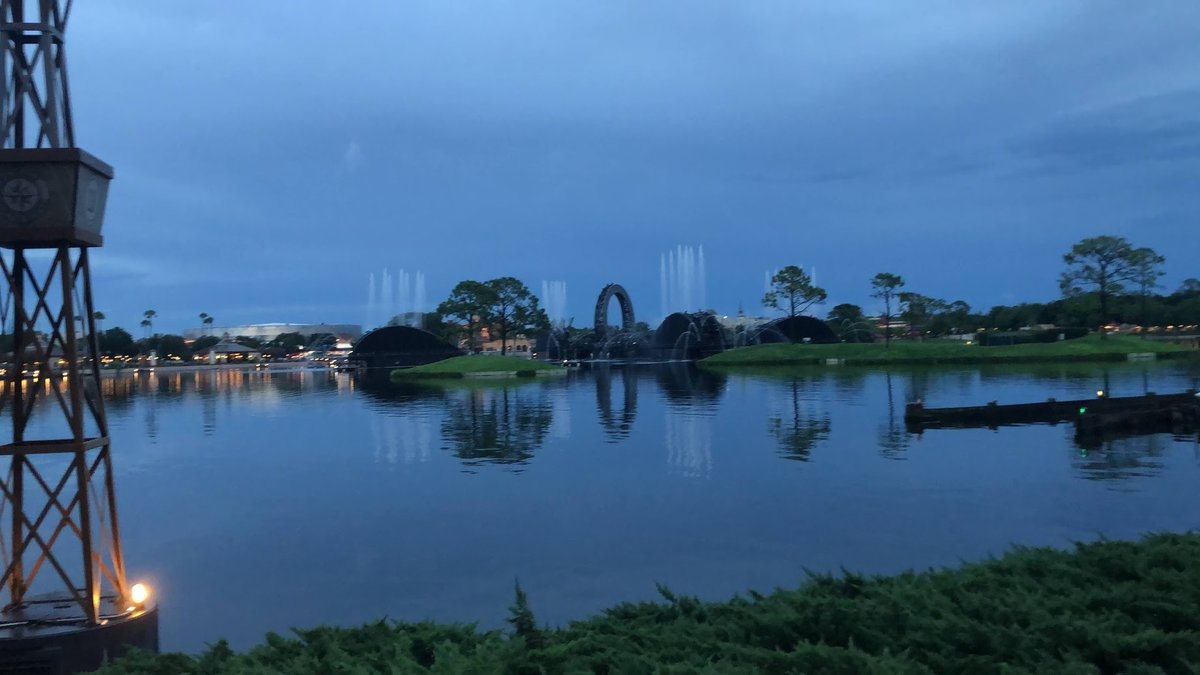 I grabbed some Ice Cream from that place in the Italy Pavilion, and it's pretty good! Then I took on Gran Fiesta Tour and Mission Space with ease, before heading back to World Showcase to see Epcot Forever!

While the kites were removed, much to everyone's dismay, it is still good to at least see some form of a fireworks show at Epcot, combined with searchlights and lasers. TONS OF SMOKE AFTER THE SHOW TOO!
Because of a lack of a real dinner, I decided to have a Turkey sandwich from Gasparilla Grill before retiring for the night. 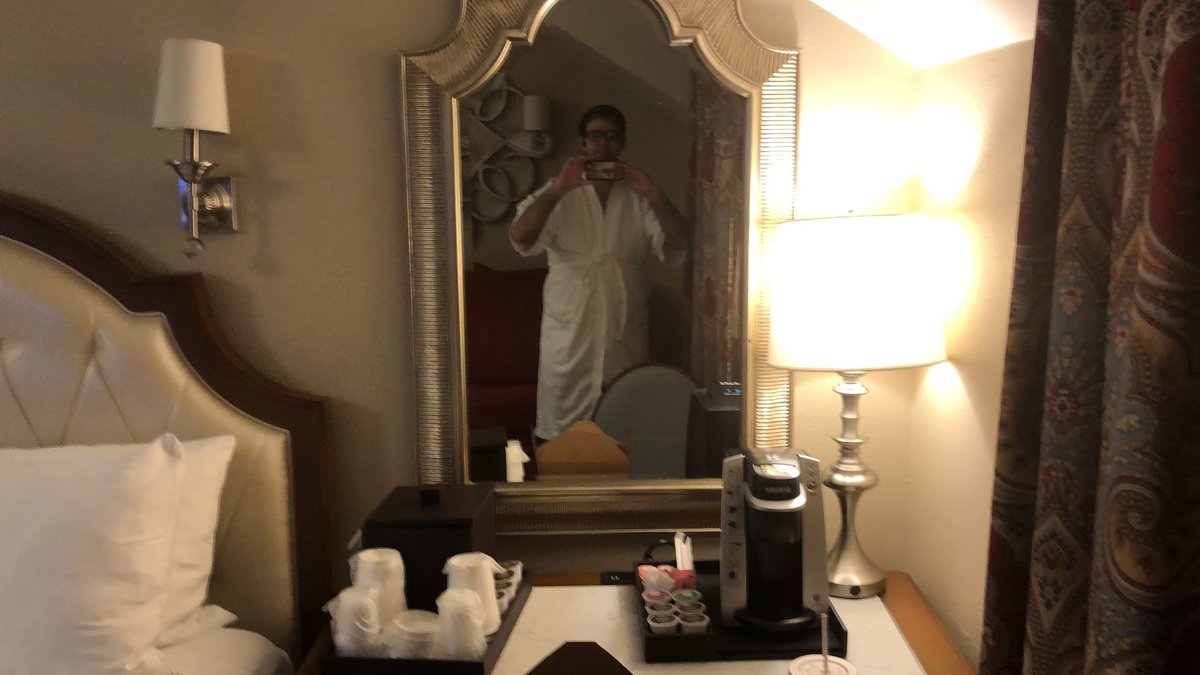 Yes, that is me, in a bathrobe.
Overall, despite a rough start, I managed to get a number of things in. The cast at Disney were super polite with resolving the issue I had with my MagicBand, and that is service with a smile!

Great room! I love the sago cay and conch key buildings on that side. It's a standard view but you get the ambiance of the monorail and can often see fireworks from the balcony. Looking forward to hearing more about your trip!
You must log in or register to reply here.
Share:
Facebook Twitter Reddit Pinterest Tumblr WhatsApp Email Share Link
Top