Menu
Log in
Register
Install the app
You are using an out of date browser. It may not display this or other websites correctly.
You should upgrade or use an alternative browser.

Seen any good movies? Or bad ones?

Wow I've missed my quick reviews on some recent movies...

Peter Jackons's Get Back: I'm absolutely fascinated by watching these creative geniuses at work. I've only watched Part One so far, but I'm excited to watch the other two. Seeing Paul essentially riff his way into writing "Get Back" from scratch because John showed up late... I can't even put it into words how amazing that was to me.

Disney's Jungle Cruise: It was okay for what it was trying to do. Reminded me a little of Brendan Fraser's Mummy. Didn't take itself too seriously, a few nods to the corny jokes from the ride.

Red Notice: Direct to Netflix with an all-star cast of The Rock, Gal Gadot, and Ryan Reynolds. WOW this thing had a $200 million budget. Some of the special effects and sets look REALLY cheap. The stars each got $20 million. It was pretty fun and nearly immediately forgettable.

Werewolves Within: I know Halloween is long over, but this is a super fun horror movie.

Some recent series we are watching/finished:

Foundation (Apple TV+): Took me a couple of episodes to get into it but it was pretty good. Complex (stretching over 1,000 years) but engaging.

Invasion (Apple TV+): Pretty good. A very slow reveal on what exactly is happening. One of the criticisms I read is that it's looking at a worldwide alien invasion only as it impacts a handful of disconnected/unrelated individuals/families, but that's actually why I like it.

The Shrink Next Door (Apple TV+): I can't believe this is a true story! Bonkers! Paul Rudd and Will Ferrell are entertaining but sometimes come off as caricatures of two NYC Jewish men in the 1980s-present day. I'm avoiding spoilers but can't wait until the series is over so I can check Wikipedia or whatnot for the full story.
U

Oh! Also: Shang Chi: fantastic mix of humor and action with a little heart. Instantly one of my favorite Marvel movies.

The Power of the Dog. That's my review. Just do it.
A

DopeyRunr said:
Peter Jackons's Get Back: I'm absolutely fascinated by watching these creative geniuses at work. I've only watched Part One so far, but I'm excited to watch the other two. Seeing Paul essentially riff his way into writing "Get Back" from scratch because John showed up late... I can't even put it into words how amazing that was to me.
Click to expand...

Samesies! I am almost finished. And I plan to watch it again, and possibly again. It's fascinating. Love it.

West Side Stiry was a very respectable production of a bona fide classic. Most people know the 1961 film better than the 1956 stage musical. Steven Spielberg takes parts of each (original Broadway song/scene sequence, the opening up of the film) and pumps lots of energy into every frame. Tony Kushner’s screenplay toys with the Laurents/Lehman efforts, adding a bit here and there, and sometimes the dialogue goes on a bit too long. Jerome Robbins’s choreography is the biggest absence, however, as some of the major numbers (notably Prologue and Cool) seem way underdone. Others (Dance at the Gym, America) are thrilling. Spielberg wisely films these largely in long takes with very few Rob Marshallesque cutaways and reaction shots. Thankfully no one monkeyed with the perfect score, and it survived intact and with top-quality orchestrations. Spielberg’s more-is-more set design contained a few too many crumbling buildings, and I didn’t buy that people would’ve been allowed to live amongst so many buildings in mid-demolition. The lead characters all sold their roles beautifully, and it was a kick to see Rita Moreno back in the old ‘hood. Also, I didn’t like Mike Faist at all as Riff. He and Tony didn’t even seem like friends, let alone besties, and he didn’t even have the right “look” (i.e., he wasn’t Russ Tamblyn). Big misfire, for me.

In high school, West Side Story is the only musical we produced that I wasn't a part of and I regret it 25 years later.

It’s been several months since I’ve seen this, but The Hand of God has been released on Netflix. Director Paolo (The Great Beauty) Sorrentino’s neorealistic, and largely autobiographical, dramatization of a pivotal year in his mid-teens, with his colorful extended family playing a huge part in the mid-1980s Naples setting, is everything an enthralling film should be. Funny, tragic, and life-affirming, it’s a warm memoir that grabs you from the first scene and never lets go. It’s truly one of the very best of 2021, a year which has given us a wealth of great cinema. 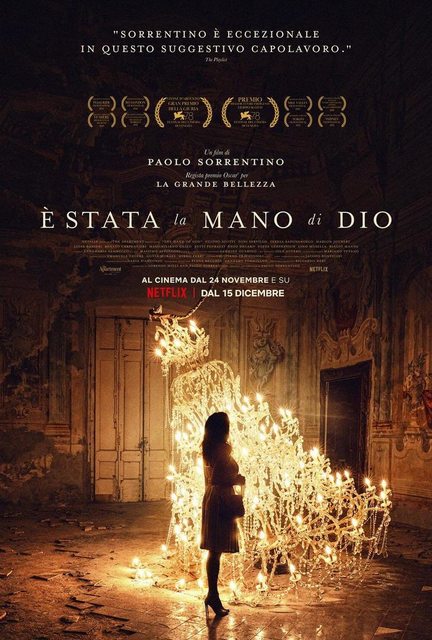 Didn't love House of Gucci. Bad accents and I knew too much about the story - I felt they didn't do it justice

I am going to watch Shang Chi next. Humor and action sounds exactly what I need to watch next. Plus it
is on Disney plus!

Nia said:
Didn't love House of Gucci. Bad accents and I knew too much about the story - I felt they didn't do it justice
Click to expand...

Two hours and forty minutes of horribly-written and -acted scenes which dramatize events that were summed up by a three-sentence paragraph In the news. Just dreadful.

Some people get so upset if you don't like something involving Lady Gaga. I can't get over the Oscars talk

Nia said:
Some people get so upset if you don't like something involving Lady Gaga. I can't get over the Oscars talk
Click to expand...

…or that she deserves an Oscar nomination just because she was in a movie. Her performance here was ridiculous.
B

Saw Encanto the other night on D+---M and I really enjoyed it, I'm not sure the kids got as much out of it. Luisa's number hit hard, but I suspect a few years' worth of analysis prepped me for that one. We watched the associated short (Far From the Tree) first. Amusingly, the short and the film were basically the same story from 50,000 feet.

Just finished watching Free Guy. I have been playing MMORPG's since 1999. Never got into the first person shooters, but this movie hit so many gamer meme's... It was hilarious.

we've watched Encanto and Raya twice each this week and they've been hits with the whole family (partner + 3x young kids); worth your time if you already have Disney+

watching Raya as I'm typing this ...

We didn't like Don't Look Up at all. Sleeping half of the movie didn't really help but in the same time it's with Leo DeCaprio, I was expecting to be interesting enough to keep me awake. Not sure to give it another try or not

Loved Shang Chi, thanks for the recommendation. Loved the visual effects & scenery in addition to the action, comedy and heart mentioned above.

Nia said:
I will add he Hand of God to my to watch list for this week.
Click to expand...

While you're on Netflix, check out Maggie Gyllenhaal's directorial debut, The Lost Daughter. This movie followed me for days after I saw it. It's pretty incredible.
U

George said:
While you're on Netflix, check out Maggie Gyllenhaal's directorial debut, The Lost Daughter. This movie followed me for days after I saw it. It's pretty incredible.
Click to expand...

We watched it last night. The ending sparked a lively debate in our household. Olivia Colman is AMAZING.
G

We are also watching The Book of Boba Fett. It's much more violent than The Mandalorian, which is giving my 11yo pause. I am not a fan of how they film/edit the fight scenes under Robert Rodriguez's direction - the jumpy cinematography is annoying. But I am enjoying the story so far.

We are watching Station Eleven this week. DH read the book years ago and wanted to see how the series played out as compared to the book. Given where we are with the pandemic, it is striking very close to home for us. We are only at episode 2, so we will see how well they translated the book into the series.
You must log in or register to reply here.
Share:
Facebook Twitter Reddit Pinterest Tumblr WhatsApp Email Share Link
Top